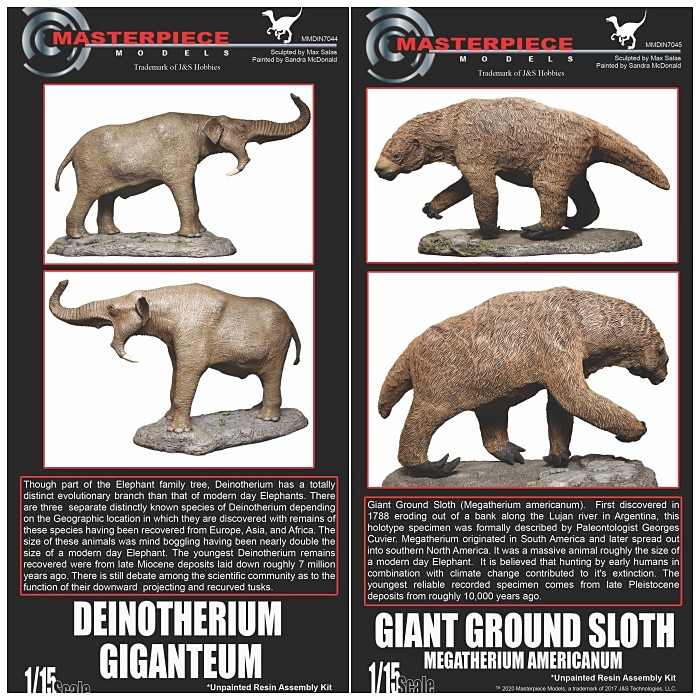 Deinotherium giganteum.  Though part of the Elephant family tree, Deinotherium has a totally distinct evolutionary branch than that of modern day Elephants. There are three  separate distinctly known species of Deinotherium depending on the Geographic location in which they are discovered with remains of these species having been recovered from Europe, Asia, and Africa. The size of these animals was mind boggling having been nearly double the size of a modern day Elephant.   The youngest Deinotherium remains recovered were from late Miocene deposits laid down roughly 7 million years ago.

There is still debate among the scientific community as to the function of their downward  projecting and recurved tusks.

Giant Ground Sloth (Megatherium americanum).  First discovered in 1788 eroding out of a bank along the Lujan river in Argentina, this holotype specimen was formally described by Paleontologist Georges Cuvier. Megatherium originated in South America and later spread out into southern North America. It was a massive animal roughly the size of a modern day Elephant.

It is believed that hunting by early humans in combination with climate change contributed to it’s extinction. The youngest reliable recorded specimen comes from late Pleistocene deposits from roughly 10,000 years ago.

Masterpiece Models manufactures and sells the highest quality resin assembly kits on the market today. Featuring kits for a variety of interests including Dinosaurs, WWII, Vietnam, Scifi, and aircraft bases.  We have acquired the rights to a large selection of the Custom Dioramics line that are now available through us as resin assembly kits.

We manufacture our kits onsite at our Vancouver, Washington USA fabrication and casting shop.  Interested in other tools? Click here to view our wide selection of Dinosaurs Kits.

Masterpiece Models is a trademark of JS Hobbies and Crafts. Please allow up to 15 days for processing.

This is a 1/15 Scale Unpainted Resin Assembly Kit.

Follow us on social media to get updates on the latest model kits and model tools from Masterpiece Models.  On our Facebook page, you’ll get new products sneak peeks and manufacturing processes from our shop.  You may even catch us in the process of making YOUR resin model kit!